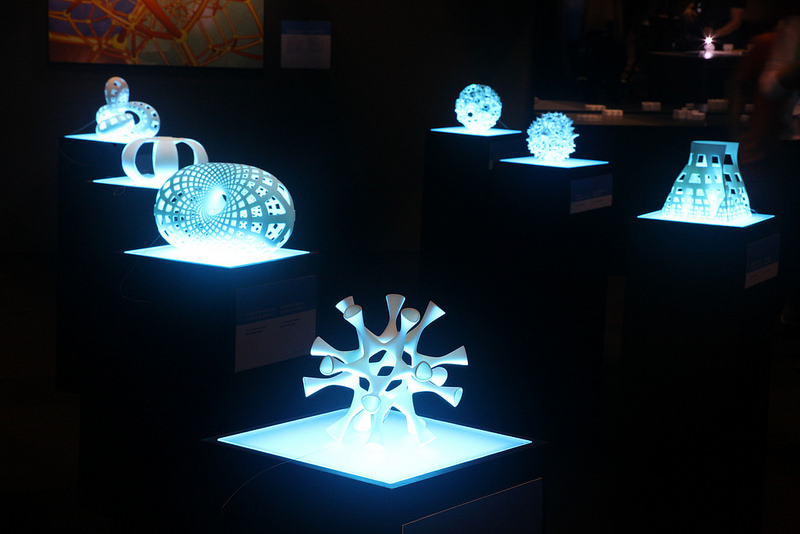 Brazilian pair Humberto Bortolossi and Marco Moriconi from Rio de Janeiro’s Federal Fluminense University had only a month to curate ICM’s exhibition ‘Geometry & Imagination,’ with the challenge of showcasing several sophisticated concepts from geometry in an accessible, interactive way. “It was insane,” Bortolossi recalls, “but our idea was to bring the appreciation of mathematics beyond specialist bubbles.”

Geometrical phenomena can be found in various expressions of nature, from insects and mammals to crystals and clouds. “People have this idea that math is just numbers and sums,” Moriconi beams, “but math is not robotic, its an abstract process. Geometry has a strong visual aspect that is accessible – far more than formulas at least!” Geometry has an ease in showing sophisticated mathematical concepts in an intense direct way. Symmetry, for example, is a concept that can be understood intuitively.

Around the exhibition, stunning parallels are drawn from nature to illustrate geometrical concepts. It explores various shapes and patterns in nature, including stripes and spots on zebras and leopards, the patterns on the wings of butterflies. Fractals can be found in trees, in crystals, but also in broccoli. Spirals, on the other hand, can be found by observing the movement of clouds from space, and also in the shell of a snail. “We want to show that there is unity in diversity through mathematics,” Bortolossi says proudly.

The exhibition is inspired by a book of the same name by German mathematician David Hilbert. Activities range from playing with shapes and shadows to observe different patterns to decoding shapes.

The exhibition is in the Pavillion 2 of the 2018 Conference, where several accessible and interactive games will stay on display throughout ICM 2018 to the participating public.