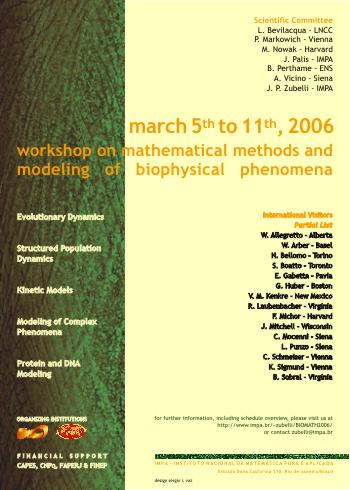 This is the fourth of a series of workshops organized by IMPA aiming at bringing together a multidisciplinary group of scientists to study problems in the biophysical sciences upon which mathematics may have an impact.
This year’s main topics are:

Stefanella Boatto. IMPA and University of Toronto
Tuesday and Thursday from 5:00 to 6:30 pm.
Course Material. Click here for a link to Gintis book.
Another interesting site: http://www.cellbio.com/images.html

Abstract: This minicourse will be divided into three lectures aimed atgraduate student level (Master/Phd). The first one will be “From differential systems to structured populations” The second one will be “Population balance laws”  The third one will be “The generalized entropy method”
References:
1. Michel, P., Mischler, S., Perthame, B.; General relative entropy inequality: an illustration on growth models. J. Math. Pures Appl. 84 (2005) 1235 – 1260
2. Metz, J.A.J., Diekmann, O.; The dynamics of physiologically structured populations. Lecture Notes in Biomath., vol. 68, Springer-Verlag.
3. Perthame, B., Ryzhik, L.; Exponential decay for the fragmentation or cell-division equation. preprint ENS DMA – 03 – 17.