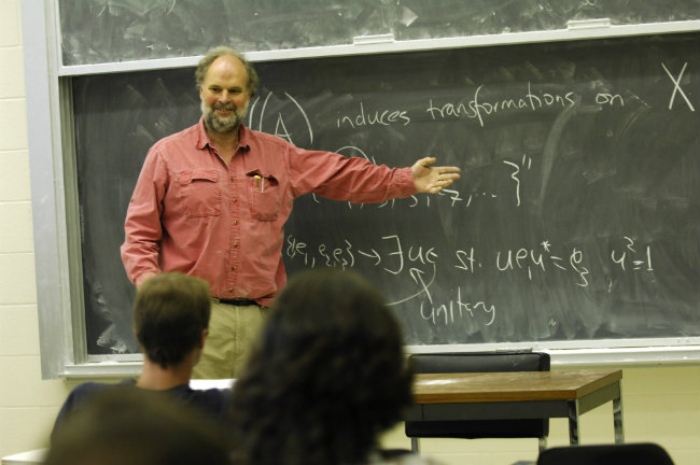 Sir Vaughan F. R. Jones, one of the world’s foremost mathematicians and a celebrated  professor in Vanderbilt University’s College of Arts and Science, died suddenly on Sept. 6. Jones, Stevenson Chair and distinguished professor of mathematics, was 67. He was a 1990 recipient of the Fields Medal, widely regarded as the “Nobel Prize of Mathematics,” among many other honors.

“Vaughan Jones was both a brilliant mathematician and a wonderful person, caring deeply about his students, colleagues, friends and family,” said John Geer, Ginny and Conner Searcy Dean of the College of Arts and Science. “His scholarship was game-changing in a fundamental way for the field of mathematics. When he joined our faculty, his presence and force of personality moved the needle for both the mathematics department and the college. He will be missed.”

Jones, who was born on Dec. 31, 1952, grew up in Auckland, New Zealand. He earned a bachelor of science and a master of science with first class honors from the University of Auckland. He then received a Swiss government scholarship and enrolled at the École de Physique in Geneva, later transferring to the École des Mathématiques, where he earned his doctorate in 1979.

Jones taught for a year at UCLA before going to the University of Pennsylvania, where he was on the faculty from 1981 to 1985. He then became a full professor at the University of California-Berkeley, where he stayed until 2011, when then-Chancellor Nicholas S. Zeppos recruited him to Vanderbilt.

“Vaughan Jones was deeply committed to the Vanderbilt vision, making the world a better place through his renowned research and dedicated teaching,” said Zeppos, Cornelius Vanderbilt Chancellor Emeritus and University Distinguished Professor of Law and Political Science. “More important, he was a very dear friend and colleague who will be deeply missed by our Vanderbilt community and others with whom he collaborated to solve some of his field’s most important challenges.”

“Vaughan contributed so much to the mathematics department, including raising its profile and rankings,” said Mike Neamtu, professor and department chair. “He attracted top graduate students who sought out his mentorship, supervising more than 30 doctoral students during his career.”

Jones’ areas of expertise included von Neumann algebra theory, subfactors and planar algebras, mathematical physics, low-dimensional topology—specifically knot theory—and more. During the mid-1980s, while Jones was working on a problem in von Neumann algebra theory, which is related to the foundations of quantum mechanics, he discovered an unexpected link between that theory and knot theory, a mathematical field dating back to the 19th century.

Specifically, he found a new mathematical expression—now known as the Jones polynomial—for distinguishing between different types of knots as well as links in three-dimensional space. Jones’ discovery had been missed by topologists during the previous 60 years, and his finding contributed to his selection as a Fields Medalist.

“Now there is an area of mathematics called quantum topology, which basically followed from his original work,” said Dietmar Bisch, professor of mathematics. Jones was faculty adviser for Bisch when Bisch was a postdoctoral fellow at Berkeley in the 1990s. They remained close friends and colleagues through the years.

Jones was known for his informal style of dress. When he delivered one of the lectures associated with the Fields Medal at the International Congress of Mathematicians, he wore the jersey of the New Zealand All Blacks rugby team.

In a MyVU article announcing his Vanderbilt appointment, Jones said that he still felt very much the New Zealander. “I’m a Kiwi at heart and get back as frequently as I can,” he said. One way he worked to improve the field of mathematics in his native country was to organize a “summer school” in January each year and attract leading mathematicians from around the world to give lectures and interact with local students and professional mathematicians at a variety of beautiful locations around New Zealand. Out of this activity grew the New Zealand Mathematics Research Institute, which he co-founded and then led from the mid-1990s to this year.

Jones was elected to the American Academy of Arts and Sciences in 1993 and the National Academy of Sciences in 1999. He was a fellow of the Royal Society in both the United Kingdom and New Zealand and a Knight Companion of the New Zealand Order of Merit. In addition, he was active in many professional organizations of his peers, serving as vice president of both the American Mathematical Society and the International Mathematics Union.

Jones is survived by his wife, Martha Jones, an economist and associate professor in the Department of Medicine, Health and Society at Vanderbilt, and three children. A memorial service will take place at a date to be determined and announced later in MyVU.