Cédric Villani delivers public lecture on 'age of the earth' 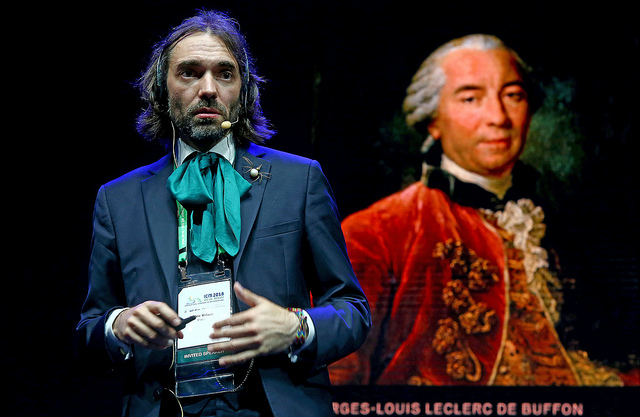 Dressed in his signature blue suit and green lavallière tie, 2010 Fields medalist Cédric Villani delivered a public lecture that explained how scientists eventually determined the correct age of the earth.  Since winning the Fields medal in 2010, the Frenchman has become a public intellectual and politician. Amongst mathematicians, he is known for his work on partial differential equations, Riemannian geometry, and mathematical physics. His 2016 Ted Talk, “What’s so sexy about math,” has been viewed more than 1.7 million times on the Ted website. In 2017 he was elected to the French National Assembly.

Read more: ‘When students are excited about math, they perform best’
Collaboration is key for mathematicians Robert Morris and József Balogh
‘A mathematician without a dream is not a mathematician’ 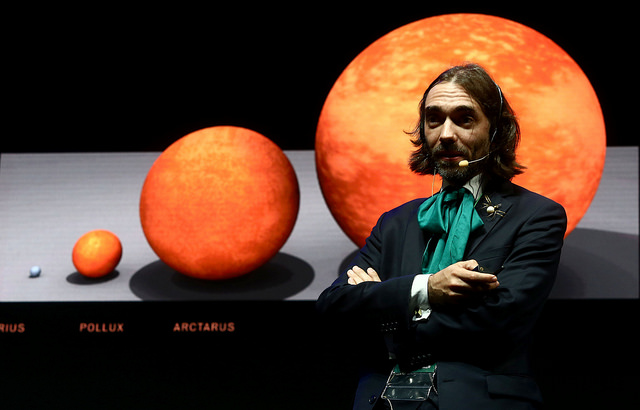 With his 1.5-hour-long lecture at the 2018 International Congress of Mathematicians, Villani proved that this title is well-earned.  To show the power of science and more specifically math, Villani walked the audience through the age-old problem that dozens of scientists attempted to solve over the course of 350 years: What is the age of the earth?   “Mathematics allows you to go beyond what your senses or your intuition tell you,” said Villani as he hinted to how the question would be eventually solved. “Math gives us the power to use abstract equations to understand the new world.”

One of the first “scientists” to address the question was Irish bishop James Ussher, whose choice of tool in the 17th century was the Bible. By comparing different versions of the New Testament, he determined that earth started 4004 years before Christ. “This was really wrong,” Villani said. “But it was the best he could do.”

In the 18th century, French mathematician Georges-Louis Leclerc gravitated toward physics (specifically the cooling rate of iron) to determine the age of the earth. His answer: 75,000 years. Leading into the 19th-century French mathematician and physician Joseph Fourier took on the age-old question with physics and math, specifically partial differentials. His partial differential equations helped to address questions of heat, fluid, and mechanics, so he was able to determine if the earth was young or old. Fournier developed an equation to determine earth’s age, but he never solved the equation.  “Fournier didn’t do the computation in the end because he was scared that he missed something in the assumptions,” Villani said.

Scientist William Thomson Lord Kelvin, known as the inventor of the refrigerator, addressed the question using mathematics and physics. In 1893, he estimated that the world was 24 millions of years old.

As the 20th century approached, scientists (including Charles Darwin himself) began a fight amongst themselves over the answer that even caught the attention of Mark Twain.  “As Lord Kelvin is the highest authority in science now living, I think we must yield to him and accept his views,” Twain said.

In the end, John Perry, Kelvin’s lab assistant, concluded that the earth was billions of years old. Everyone else thought the interior of earth was solid, but Perry proved it is liquid.   “Let us pay homage to the first human being who was able to find the correct range of age of earth using scientific reasoning,” Villani said.