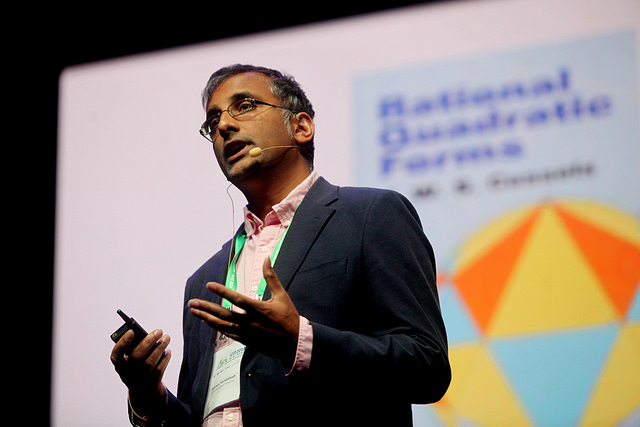 Fields medalist Akshay Venkatesh delivered a plenary session to a packed auditorium of international mathematicians in Riocentro this afternoon, explaining the his current research conjectures. The Indian born academic was awarded the prestigious Fields Medal on Wednesday, at the opening ceremony of ICM 2018, for his cutting edge work on analytic number theory.

After thanking his family and his research collaborators, the Stanford professor advised the captivated audience “this will be a high level lecture”, before proceeding to outline the development mathematical concepts from the 19th century, using simple examples. “My work is conjectures based on conjectures,” he noted, briefly citing the insights of great math thinkers Beilinson and Bloch from decades ago.

Read more: Brazil’s Brightest: Gugu, the Eternal Math Olympian
The Research Conundrum: Write lots of easy papers, or tackle the tough ones
The Shape of Geometry to Come According to Andrei Okounkov

Oxford academic Kevin McGerty was highly impressed with what he heard during the hour-long plenary, noting the variety of specialties in the audience this afternoon. “It’s incredibly ambitious to explain in an hour, the conjectures that he’s currently working on. People know very different things and have very different specialties, so to attempt to explain cutting edge questions in a particular part of that to everybody is already hugely demanding and he did an impressive job of at least giving a flavor of that.”

McGerty found Venkatesh’s words about the creative and inventive nature of math to be very reassuring for those working in the area. “I really liked the way he got across the sense that often we have some idea of how things work but it’s pretty vague and imprecise, and that often mathematics is struggling in the dark in some sense; grasping at that one little bit of light that you see over there. He outlined this great vision that we have, that is slowly crystalizing into something more concrete and checkable. Really impressive.”

A child prodigy, Venkatesh began his bachelors degree at age 13, and had completed his PhD at Princeton University by the age of 20. The father of two was born in India, grew up in Australia, and currently resides in the US. He is currently based at the Institute for Advanced Study at Stanford University.

After his speech, Venkatesh was surrounded by excited Indian delegates, all eager to get his autograph, and have their photo taken with the famous mathematician.